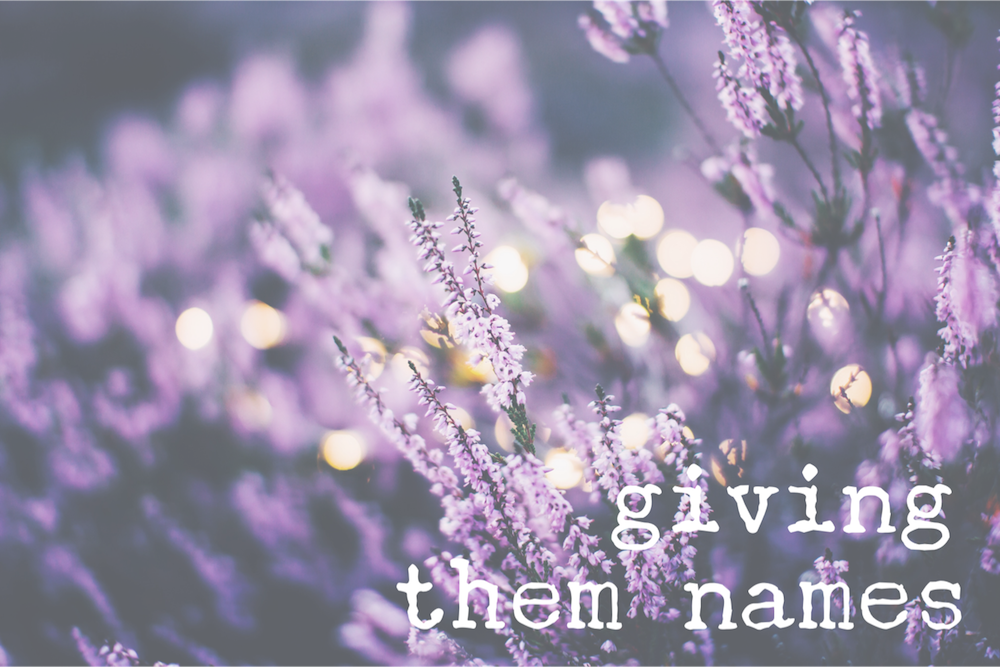 To say the grieving process is a complicated thing would be a major understatement. There is no straight line to healing. In my own experience I’ve felt that my healing process is more of a constantly changing spiral than a line. I have found myself many times spiraling back to familiar pains that I thought I had found peace with. And other times I’ve circled around new pains that I’m totally unfamiliar with. There have been many times that a new layer of grief emerges that I was previously unaware of. Something new inside of me stirs up and I’m left in a tornado of emotions.

Five years ago we lost our first baby at 13 weeks. The name we immediately began using was “Baby Butler.” It happened naturally and without much intentional thought. Because we didn’t know the gender, our baby didn’t have an actual first name but held our last name—and Baby Butler just worked. That was the name I used and it was the name others used. I didn’t think anything more about it.

However, 2 years later after we lost our second baby at 5 weeks, I was faced with a dilemma. The sympathy cards and texts and messages that we received all referred to Baby Butler. But to me, Baby Butler was our first baby. This loss was a separate loss. This baby was a separate baby. “Baby Butler” was not meant to be a default name that could be placed on them both. But I had no substitute name so it kind of became just that—a label, not an actual name.

For the past year, I have prayed with a longing—a longing that almost hurt—to name my heaven babies. It became this big thing to me that I could not stop thinking about. I was not just naming past losses, I was giving names to my children who just happened to live in heaven. And just like the long process of praying for and thinking of names for my earthly babies, I began seeking the perfect names for my heaven babies.

I constantly felt a sense of incompletion. There were so many factors. What I knew was that I did not want to give our heaven babies gender specific names. And I did not want names that simply sounded nice. It had to feel right. They had to be of sacred importance. When I found them, I would just know.

As I was reading the loss stories of a friend, she shared that her heaven babies as well as her earthly baby are represented by different meaningful symbols—either through words that God has given to her or through special Bible verses. I thought that was so beautiful.

My husband was sitting next to me and we started talking about how sacred the smell of lavender is to us. We began having a sweet conversation about how every time we breathe that scent, our hearts and minds immediately think about our first baby. With a simultaneous pause, grin and agreement, we said, “Lavender.”

That was it. How had I not see it before? Our first baby’s name had always been Lavender.

As I began crying tears of peace and gratefulness and relief that our first baby had a name, we began to further reminisce. We shared memories of our second baby with each other. We had learned I was pregnant after Thanksgiving that year and lost the baby on Christmas Eve. The only reason I even took a pregnancy test was because I had a complete and utter breakdown over…pinecones. Yes, you read that correctly. Pinecones. Shortly after we set up our live Christmas tree, I noticed little baby pinecones all over the tree. And 2 seconds later, I had the realization that those cute pinecones would not grow anymore because we killed the tree. Well, we didn’t kill it, but we bought it already dead…and that was just as bad. So I cried. And not just the regular cry. It was the ugly cry. In between my completely logical sobs, I explained to my husband what was going on. And his response was (and I’m quoting him here), “Umm, I think you…need to take a pregnancy test.”

So needless to say, our Christmas tree played an important role for that time. On top of the humor that remembering that story brings to us, my husband reminded me how every molecule in our house smelled like pine that season. Our living room was small, so the moment you opened the front door, the smell of pine was wonderfully overwhelming. I always thought a Christmas or winter name felt fitting for our second baby, but none of the typical Christmas names were right. And then he suggested, “Pine.”

How did both these names just flow out of our mouths in one night after a year of prayers and longing? Oh Lord, thank you. They are perfect.

Naming my heaven babies has been one more connection I have with them. I’m learning to embrace my changing, sometimes unpredictable, spiral. Because it’s in the times of circling back to the pain and the rawness of my losses that I feel the closest to them again. And sometimes new connections are made. And for those reasons, I will happily flow in that spiral forever.