Friends’ Pregnancies After My Losses 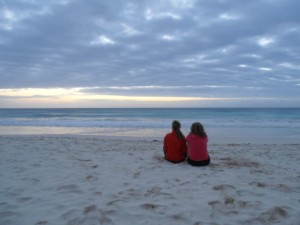 I made it through two healthy pregnancies after two losses. I have living, thriving daughters who allow me to feel immersed in what once felt so far away—active, chaotic, exhausting, invigorating, stunning parenthood. Only four years ago, time moved more slowly than I’ve ever known it—while I was surviving my children, weathering back-to-back losses. The waiting felt endless, but thankfully not hopeless. Otherwise, I wouldn’t be here today. My son wouldn’t have two little sisters.

After I gave birth this year, I thought I had also released the anxiety of pregnancy after loss. Somehow—OB appointment by OB appointment, panicked freak-out by panicked freak-out, guided meditation by guided meditation—we made it through. That phase of the journey was now behind us, or so I thought. What I hadn’t accounted for is the anxiety by proxy, as I sit on the sidelines of my friends’ pregnancies after my losses.

If they haven’t experienced loss, the sidelines feel particularly delineated. I watch their anxious yet categorically different anticipation of the anatomy scan—the one that once sent our world spinning. I listen as they lose sleep from the discomforts of pregnancy, but not necessarily the trepidation of waiting for the baby to move. Most temper these observations, but innocence is just that—it’s hard to know what any of us will say that might send another person reeling a little bit inside. But it’s important for me to support their journeys, too, and shepherd, however peripherally, the arrival of the truly innocent—their beautiful babies. It’s important to still ask, “How are you feeling?”

If they have experienced losses of their own, I can’t help but jump into the game. I talk more openly, knowing they need to. “How are you feeling?” becomes a different question, revealing the under-riding river of worry and fear. In so doing, I stir up my own. I hold my breath with them, awaiting results and scans and NSTs and trimester milestones and due dates. As anxious as it all is, this inquiry can hold us up, help us float. If I know anything of the baby loss community, it’s this powerful ability to connect and support.

When I was particularly panicked this last pregnancy, one of my loss mamas overnighted her Doppler to me. When another friend, whose daughter was born two months early due to cardiac distress, was having similar panic in her subsequent pregnancy, I passed the Doppler onto her. Just having it in the house set her mind at ease. And how important that is for our bodies as they carry our babies.

While my pregnancies are over, I remember so well how impossible it can feel though to calm the mind, to take those deep breaths. When you’re living it, pregnancy after loss is so front and center, we might be stunned when someone says, “Wow, you’re already half way through. That went fast!” We know it hasn’t. We know what’s fine today may not be so tomorrow. So I give the day-by-day support because that’s the only way through to the end we are all hoping for.

When the mom is still waiting, when it all still looks like loss, I think my role on the sidelines is the most important. Because as active as my parenthood may be right now, I never want to forget how the waiting felt, how the grief wrapped itself around the brightness of the sun, the casual small talk of those not acutely grieving, the ache from the long haul of hope. Perhaps that’s the most important and ongoing work now in this life after loss—standing by and waiting, too.