Our first pregnancy after the loss of our son Malachi ended in a blighted ovum, devastation, heartbreak, depression, isolation…you name it. The month following that diagnosis, we dealt with all of these emotions, as well as the one year angelversary of Malachi’s passing. It was hard. So hard. I didn’t know where I stood on trying for another baby. Loss clouds so much of the naïve joy and expectation that comes with a ‘typical’ pregnancy. I felt like I was in a place where even thinking about having another wasn’t an option. That even if I were to get pregnant (which, thankfully has never been a problem for us) that there would be no excitement; all there would be was doubt, worry, anxiety and stress, and how is any of that enjoyable?

Time. Time is so precious. Time is precious in that it moves so fast, but that it can also separate you from the acuteness of your situation, lending your heart to learn how to heal a bit, to fill in the cracks of heartbreak with new dreams. Time did just that. In October 2015 I was feeling more ‘ready’. Kind of if this is going to happen, let’s start trying now. November 21 (a Saturday) my hubby and I went to dinner for my birthday. I expressed to him where I was at. Feeling like I was ready again, although I’m not sure that after a loss you’re every really, like really ready, you know? 7 days later (the following Saturday) I got a bug to take a pregnancy test. My period wasn’t even due until Monday, and I had been so careful about “watching our days” that I figured this month was a wash and completely unlikely. I had a cheapie amazon test strip and it was the middle of the day. For some reason I took it. 5 mins later…the faintest line possible. So faint. But there. WHAT? This can’t be, we literally just decided a week ago to try, so I figured I had some time to get used to the idea. The next morning, I dug up the last first response test I had hanging around and decided to take it. There the line was in all its glory, not faint, dark as can be. Completely, 100%, obviously positive. I took it to hubby and had him recall our birthday dinner conversation, I then told him I didn’t think we had to try very hard and that I had gotten a positive test that morning. We were overjoyed, immediately embracing and thanking God for this new life, and praying that all would work out.

We decided not to tell anyone (well I told my BFF and sister) and that we’d tell our families on Christmas. I called my doctor and my maternal fetal medicine specialist. I was put on Lovenox at 5 weeks, and our “confirmation” ultrasound was booked for Dec 22, a few days before Christmas. I started to think that this would either be a very exciting holiday, or very devastating. I hate those thoughts. I started to see symptoms of pregnancy, I’m a tummy sleeper and by the time my ultrasound came around I was finding it already uncomfortable, boo. But it was too early?! We go to our ultrasound, a mix of nerves and excitement fills our room. My doctor comes in with such a hopeful smile (she’s been with us through everything). I think she silently said prayers she would see a heartbeat, knowing how much we’ve been through and how much she cares about us. The ultrasound begins, I see a blob, oh what a precious blob! My doctor says she can’t get a good look and switches the view of the ultrasound. TWO SACS.  She goes “oh you guys, wait a minute……” Two Sacs. Two Heartbeats. TWINS. Spontaneously conceived, even when we weren’t trying to get pregnant at all. Thoughts of, “Am I capable of carrying twins?” immediately flood my mind. I think my doctor had tears of joy in her eyes for us, my husband emphatically excited, exclaiming a “YES!” that I’m sure most of the other patients heard. Emotions that are unable to be accurately described in words. But joy. So much joy. These babies. Our double rainbows, our double blessings. 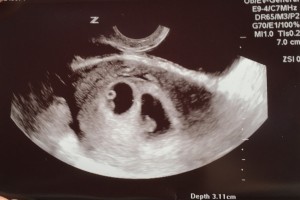 We are due August 8, but the babes will be delivered in July (prayerfully we are hoping for 38 weeks, July 25!). I am 15 weeks and so far everything has been perfect. I am growing daily and feeling so much peace I had no clue was possible after what we’ve been through. 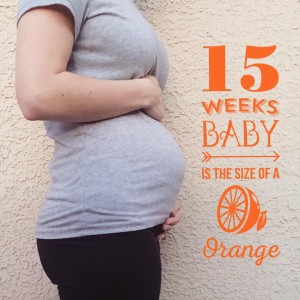 Is. 61:7 “and you will receive a double portion blessing and everlasting joy will be yours”