Courageous Mama of the Month September 2015

Our Courageous Mama of the Month for September 2015 is…. 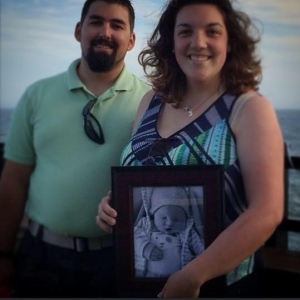 I am a courageous mama because my husband and I have an appointment on September 1st to get the “okay” to try for another baby. On March 17, 2015, we lost our son. Arthur Joseph Teixeira had grown in my belly for 38 and a half weeks. My pregnancy was perfect and so was he. At our 38 week check- up I was 50% effaced and 2 cm dilated. Two days later we went into the hospital. Not because I was in labor but due to lack of movement. They told us Arthur no longer had a heartbeat. After almost 30 hours later he was in our arms and we held him for 9 incredible hours. During our time with him we made many promises. We promised we’d move forward every day for him. We promised we would live a full and happy life for him. We promised things that if it were us that God took home instead of him, promises we would want him to live by. Among other promises, the last thing we told him is we would give him a sister and a brother. We went home that night and listed the promises. We said them all out loud so we would never forget. For months I obsessed with pregnancy, not only because I made that promise but also because my husband and I were ready for a baby.

We will be featuring bits of Janice’s story throughout September. We’ll share her journey of strength, heartache, and hope and she and her husband grieve and persevere.

Thank you, Janice, for sharing your story and for being courageous!