Courageous Mama of the Month of February 2016

Courageous Mama of the Month of February 2016 is … 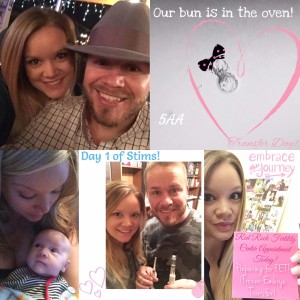 Shortly after her submission, Tracey learned her little girl did not survive the transfer.

I’m a courageous mama because I’m terrified, yet trying. As I sit here today writing this, I’ve just completed my first IVF transfer in hopes of conceiving a healthy child after losing one living child, having to terminate a following pregnancy with an otherwise healthy child from a fatal genetic condition, and having two miscarriages.

My husband and I had no idea we were genetic carriers for an extremely rare and almost always fatal genetic disorder until we lost our first-born son after two months due to the disorder. It was undiagnosed and unexpected, even though there was always something clearly not right.  With blind faith, we tried again and found that a second son would have his exact mutations and have the same disorder. We couldn’t bear to watch it again, so we let him go at peace. If he had been our first, maybe we could have seen it through, but I can’t even explain having already seen it, to go through it again, for him more than us. That decision was not made lightly.

We turned to IVF and had a collection of 16 eggs! We were setting up for a transfer and would hope to have more embryos for siblings if we could be so lucky. Unfortunately we were left with only one that progressed enough and was disease free. So despite everything, and literally putting all our “egg” in one basket, we transferred our little girl embryo this morning. As terrified as I am to not be pregnant or to be pregnant, and finally go into all of this over again, is unbearable.

I lean in support groups like this, and strong, surviving, hopeful women to push me through. I’m strong because I admit that I am terrified. It is terrifying, but my desires, hopes and dreams outweigh that fear. I’m trying. We are hoping and praying. I’m documenting because success or fail, I’m not alone. There are many out there that are going through the same, and it helps to have support.

After reaching out to Tracey, we discovered that her daughter did not survive the transfer. We gave her some time to think about whether or not she wanted to move forward as our Courageous Mama for the Month of February. This is what Tracey had to say –

“This may be just the inspiration I need myself, and if I could help others along the way too, before I get my happy ending, then the better. I think it’s easier to give people hope when you have your rainbow baby, but seeing the kind of strength women have who don’t yet and still have the fight in them to try, that’s strength. Let’s do it. I’d be honored.”

We will be featuring bits of Tracey’s story throughout February. We’ll share her journey of strength, heartache, grief, and inspiration.

Thank you, Tracey, for sharing your story and for being courageous!