Courageous Mama of the Month of March 2016

Last week during #PALAwareness week, we briefly introduced you to our Courageous Mama of the Month of March…. 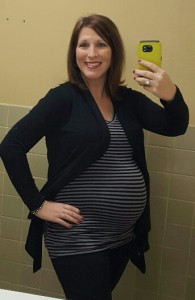 Here is her story:

I am a Courageous Mama because I’m choosing to celebrate each day.

In March of 2015 , after being married just two short months,  my husband and I learned we were expecting our first child. Ecstatic, shocked and thrilled were just a few words to describe how we felt. At the time I was 33 years old and had no children, so this was new territory for me. I immediately began googling all things pregnancy and completely changed my habits and routine to anything that was best for baby and me.

Our first sonogram revealed that I was around 7 weeks along, so naively and innocently we decided to go public with our big news via a Saint Daddy’s Day parade and social media.  This was Saturday March 21,2015. We were overwhelmed with the love and support by all of our friends and family. Our little “Butterbean”was already so celebrated and loved. I remember being extra tired that afternoon and after church the following Sunday,  I went to the bathroom and wiped to find blood. Immediately my heart began racing, and I had a million thoughts running through my head.  I called my after hours nurse who advised me to come to the ER, after several long and painful hours, an ultrasound tech came in to perform a scan. Of course she couldn’t tell me anything, so I remained hopeful. A few long minutes later,  the doctor came in with the most devastating news I had ever received — our Butterbean had stopped growing and no longer had a heart beat.

I remember going numb. I remember my parents and husband holding me, as I sobbed hysterically and uncontrollably.  Just one day after we announced out joyful news to the world, we learned we had lost our baby. That Sunday was an awful day as I had to go home knowing my baby was no longer living inside of me. I remember feeling like a human casket. I couldn’t stop crying. It’s all I could do. I couldn’t even talk. The following Monday I went into my OB office and was given several choices. I chose a D &C. The thought of being able to “lay my child to rest ” was what I wanted.

The next few days and weeks were filled with so many emotions, as I was still getting calls and texts congratulating me on our news. I was embarrassed for some reason, I was ashamed at having to tell people that the sweet baby we had just announced was no longer living and I was no longer pregnant.  One of the worst parts was having to explain to my 9 year old step daughter that her baby was now in heaven. A child grieves very differently than an adult. Seeing her try to process it and helping her navigate through grief was nearly impossible, as I had little to offer of myself.

Physically I healed, but emotionally I was far from it when I learned just two months later that I was pregnant again in early June. This news absolutely terrified me. I had so many new emotions on top of the grief I was already experiencing.  I honestly was quite numb, very cynical, and very negative.

After our first ultrasound, which confirmed I was 5 weeks along,  I didn’t want to tell a soul. I didn’t want to go through the same thing I had experienced just two months before so we kept it our secret. Scared, hurt, and still mourning, I was convinced I was going to lose my mind.

At our 8 week scan we sadly learned that our baby wasn’t growing and had a incredibly low heartbeat of 91. The nurses and staff and my doctor reassured me that they had seen this before, and sometimes a baby just needs time to “catch up.” For the next 3 weeks, I went back for scans only to learn our baby’s heart beat had dropped to 85 then 71 then 59. At this point my doctor told me there was nothing that could be done. It was likely my baby wouldn’t survive, so for the next week I had to wait for “little bit’s” heart beat to slowly stop. During this time I was angry. I was imaging my baby hurting or suffering. I prayed and prayed for God to either save my child or take my child.  The waiting was killing me.

My final scan revealed no heart beat, and this time I chose cytotech rather than another D&C . I was given instructions and told that the medicine would induce labor, so that I could expel my child and any other tissues. Knowing that I was going home to do this was very hard,  it seemed almost barbaric. My experience with the meds was quick and painless. I couldn’t bare to look when I used the restroom. I just simply flushed each time.

I was so angry with God and with the whole process.  I had now lost two babies via miscarriage in just 3 months, and I know I would never be the same. Eight weeks passed by and in August, I noticed that I hadn’t gotten my period. The first time took 4 weeks post d &c for my cycle to return, so I contacted my doctor’s office.  They advised me to come in, and I learned that I was pregnant for a third time,  I was 5 weeks along which meant I conceived just one week after my second miscarriage.

I was terrified yet again , hopeful yet so scared………..so here I am currently 35 weeks pregnant and due April 10, with a healthy and active baby girl .

This pregnancy journey has been so difficult. I feel as if the innocent joy has been stolen from me. I have been consumed with anxiety, made more than a dozen trips to the ER or my doctor’s office, and probably driven my husband nuts. I experienced the loss of two children back to back, and with my current pregnancy and not knowing what the outcome would be , I began celebrating each day,  each milestone etc . Rather than look too far in advance,  I try to focus on each day . Some days this is easy and some days it’s incredibly hard.

I’ve passed both of my first two children’s due dates and my first anniversary of my first loss. To say that pregnancy after loss is hard is quite the understatement. It’s the most difficult and emotional process I’ve ever been through.  Terrified and happy at the same time, having to trust your body that failed you and allowed your babies to die is very hard.

Fortunately I found a wonderful grief and pregnancy after loss support group. These women, these “steel magnolias,” are just as scared and vulnerable as I am, yet there is an indescribable strength present among us. It’s hard to describe, but our sisterhood is filled with hurting women who, in spite of the odds, in spite of the pain, in spite of their Grief, choose to try again and allow themselves to be vulnerable and subjected to the worry, the uncertainty and the same process that ended so badly for them before. There is a strength in venturing back down a road that has caused you so much pain and that is why I am a privileged member of the courageous mommas , because no one is promised tomorrow so I celebrate each day and today, I have a healthy baby girl growing inside of me .