The word stared at me from the folded piece of paper, at once both encouraging me and 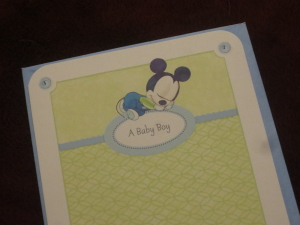 taunting me. I swallowed and responded with a careful smile, aware of other family members who were watching my reaction.

It wasn’t until later that I fell apart, with tears of confusion, joy, disappointment, and grief all mingled together.

I was halfway through my rainbow pregnancy and my husband and I had gone around and around about whether we would find out our baby’s gender this time. We had with our first baby, beginning our tradition of having the ultrasound technician write the gender down and then seal it in an envelope. We did the same thing with our daughter Naomi, when we had an emergency ultrasound to check on her health because of the abdominal pain I was in. We hadn’t planned to find out her gender that weekend, and I was feeling so lousy that we felt it was bad timing to find out at that moment, so once again, the technician wrote it down for us to open later in a quieter moment. Two days later, I went into labor, and she was born sleeping, just shy of nineteen weeks. We opened the paper several days later, to see the technician’s joyful and accurate proclamation – “It’s a girl!”. And the tears flowed again. Two more losses followed in the next year, too early to know their genders.

This time, my husband would have preferred that we wait and not find out our baby’s gender. There are so few true surprises left in this world, he reasoned. But I felt like I needed to know, because I knew no matter what word was written on that paper, I would have issues with it. I wanted to have the time to work through those issues before my baby was born, before I was sleep-deprived and hormone-crazy.

If our baby was a girl, I knew I would grieve our loss of Naomi all over again. I would be thrilled for our living daughter to have a sister, to not have lost out on that experience after all. But I would also have conflicting emotions, feeling like I was trying to replace one daughter with another. I knew it would be hard.

If our baby was a boy, I knew I would grieve our loss of Naomi all over again. I would be thrilled for my husband to have a son, for our daughter to have a little brother like I do. But I would also miss my baby girl all over again, especially since it was likely that this would be my last pregnancy. I knew it would be hard.

Now the future was staring me in the face. I carried a baby boy in my womb. Number one, I realized I had no idea how to raise a boy. Number two, I didn’t want to raise a boy. I wanted a little girl. I wanted Naomi, and if I couldn’t have her, I wanted another girl. I wanted my daughter to have a sister, something I hadn’t had. I wanted to see how another little girl would be different from our first daughter, and the same. I wanted the experience of raising two little girls, an experience that I had been robbed of, along with losing my daughter herself.

My fears had come true. I  knew that I needed time and perspective to wrap my head around the idea of having a baby boy, which was my reason for wanting to know the gender early to begin with. These are some of the steps I took.

I faced up to my feelings. I was disappointed that our baby was a boy. More than disappointed. I was mad. And I felt like the worst mother in the world. I knew it wasn’t true, but it felt true. I acknowledged how I felt without dumping on myself.

I found comfort in community. I googled “gender disappointment.” I talked with friends in my Naomi’s Circle Pregnancy After Loss support group. I chatted online with my Hannah’s Prayer friends. I found out that I wasn’t alone and that it wasn’t the mark of a bad mother to be disappointed in your baby’s gender.

I asked for input from mothers of boys. I started following a blog for mothers of boys to build a vision of what it is like to raise a son. I got a couple of books about raising boys. But the most helpful thing I did was to go on Facebook and ask my friends who have boys, “What do you love about having a son?” Their answers encouraged me so much, especially the ones who could tell me about how their sons adore them, that they are their first love, and how strong that mother-son bond can be.

I went shopping. Seriously. I thought that little girls had the upper hand in the “cute” department, but I found so many stinkin’ cute clothes for little boys! It lifted my spirits.

I brought my fears to God. I asked Him for wisdom in how to raise a son. And I poured out my heart to Him about how much I was missing my daughter, and how disappointed I was in how that part of our parenting dreams had turned out.

By the time our son was born, I cannot say that I was totally on board with the whole “mother of a boy” scenario, but I had worked through enough of it that it was not hanging over my head. Our little boy was born strong and healthy and absolutely beautiful. Three and a half years later, he is my joy. We have an amazing bond built through some challenging times in the last several years, including a diagnosis of “failure to thrive”, early intervention, and a speech disorder called apraxia. He and his big sister are as close as can be. He adores his daddy. I cannot imagine life without him and my disappointment that he was not a girl is a part of our story, but not a long-lasting one.

If you are dealing with gender disappointment, please don’t be hard on yourself. It is so normal, one of many facets of pregnancy after loss that feels weird but isn’t. If you know now, before your baby is born, take the time you need to get used to the idea. Let this part of the journey do its work in shaping your mother-heart for the days to come when you welcome your sweet rainbow into your arms and your heart.