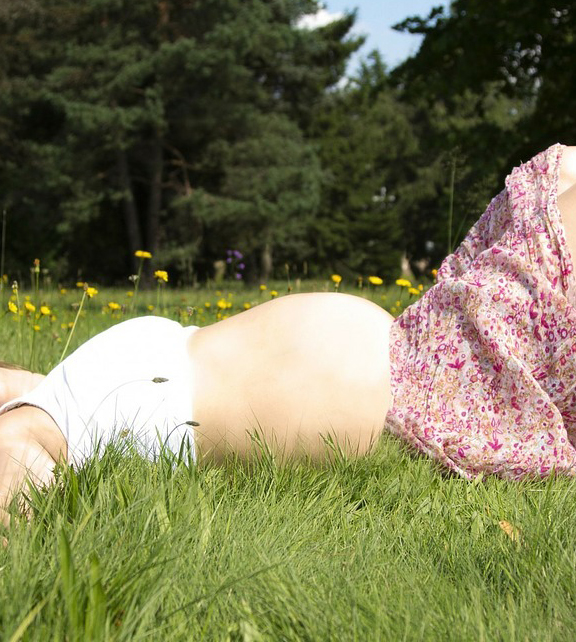 I lost my daughter Aisley at 41 weeks during childbirth on August 5th, 2012. Losing her was excruciatingly painful. It still hurts today. When I became pregnant with my son in April of 2013 my first thought was to temper my excitement. I didn’t want to imagine losing my son as well so it seemed like emptying my mind and detaching was the best option. I felt I had to remain realistic and accept that I could lose him as well.

As time passed I found myself instinctually connecting with my son. I knew I already loved him. There was no way to deny it. Besides, if I were able to successfully distance myself during the pregnancy, would I really be spared any pain if he died? Of course not. No matter what, I would be absolutely devastated, just as I was when I lost his sister. It was that thought that helped me realize that I needed to allow myself to connect.

I sang to my son. I told him stories. I beamed at ultrasounds and hung pictures on my refrigerator. I rubbed my belly all the time and savored every punch and kick. I bought baby clothes and painted watercolor pictures for him. I gave him the same attention, love and adoration that I had given my daughter because he deserved it. If tragedy struck again and my time with him was going to be brief I wanted every moment to be the best it could be. I wanted him to know how much I loved him.

There were many mentally and emotionally challenging moments during the pregnancy. There were times I felt crippled with fear, terrified of losing him. To cope I accepted every feeling I had and felt them full force. I slowed my breathing and I cried until I felt myself calm into a meditative state. I talked to my son in my belly and my daughter in my heart and I found a strange sense of comfort from them. My babies actually helped me get through some of the most frightening instances of my pregnancy.

Here is my advice for you, brave mamas. Don’t hold back. Bond with your baby right now, right this instant. Put your hand on your belly and tell them how much you love them. Allow yourself to attach and connect because they deserve it…and so do you.

About the Author: Loni H.E.

Loni H.E. currently lives in Denver Colorado with her husband Matthew and their beautiful son Meyer. Losing her full term daughter Aisley in August 2012 during labor was the most painful tragedy she has ever experienced. Her love for Aisley has only grown since she passed away and she makes time to honor her often. Despite Loni’s grief, her dream of having a family never faded and after nine months she felt frightened but ready to try to conceive Aisley’s little brother or sister. Her second pregnancy was one of the most challenging, frightening and empowering experiences of her life. All the risk was worth it as she welcomed her beloved son, Meyer, into the world on January 8th 2014 (six days before her birthday). You can read about Loni’s journey at her blog, A Girl Named Kevin and on her Facebook page.