The Purple Stained Glass: One Mom’s Complicated Relationship with the NICU 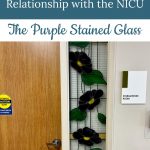 I was in a fog from the medicine given to me during my emergency C-section. The overhead fluorescent lighting seemed to be a blur as the two nurses rolled my bed down the hallway. They were both silent, avoiding eye contact. I knew that something was wrong.

We came to a wooden door with a purple stained glass panel. I remember looking at the glass and thinking how strange it was to see it on a hospital door – a sterile environment with a touch of beauty. 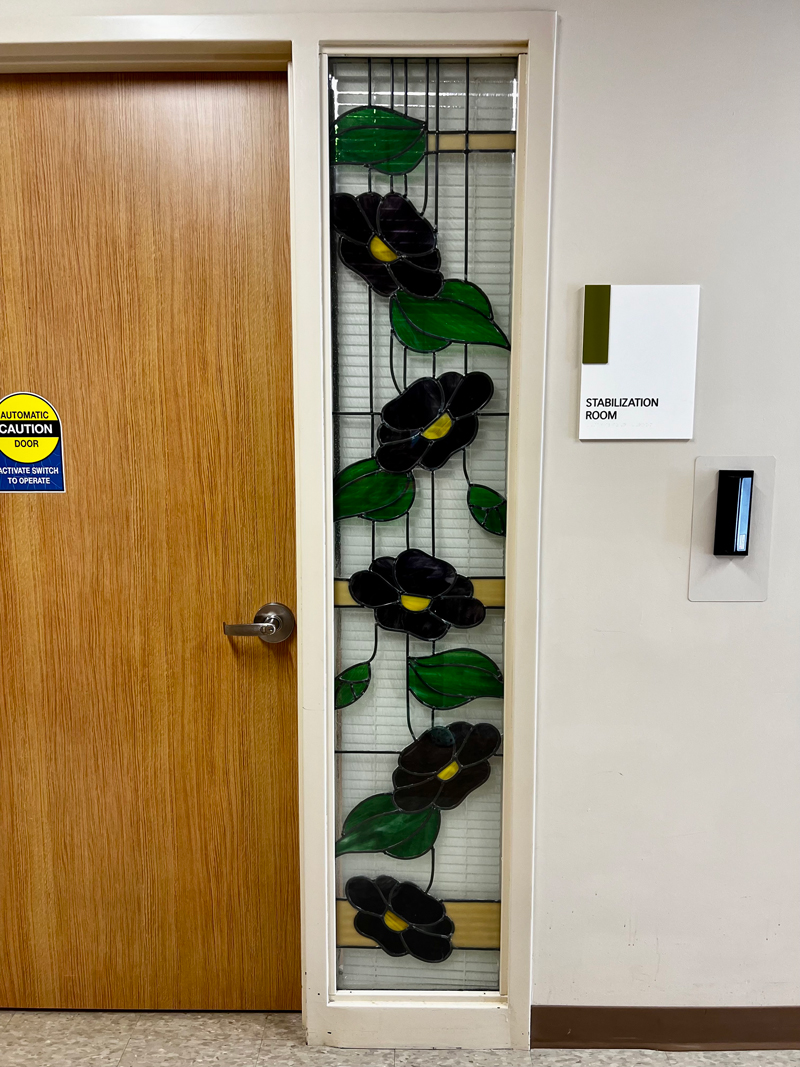 Over two years later, I sat in my MFM’s office, sobbing into tissues as the doctor explained everything to my husband on speakerphone: “Your daughter is showing signs of anemia. We are going to increase our monitoring, but she will be delivered early. We are hoping to get a few more weeks to help her develop.”

My husband’s voice, calm and steady, asked for clarification. He asked for test results. He asked for future plans. I could only cradle my belly and cry. I just wanted our daughter to arrive safely, and we were only 31 weeks along.

We already knew that an early delivery was possible, even likely. My pregnancies were high-risk for Rh-disease, which would then cause hemolytic anemia. After we lost our son, Richard, from a fetal maternal hemorrhage, the mixing of our bloods caused me to develop antibodies and a resistance to the RhoGAM shot. Our first rainbow pregnancy with our oldest daughter was high-risk, but she was born via scheduled C-section at 37 weeks with only mild jaundice. We knew that another pregnancy would be difficult, but we thought we were prepared for it. I was naive to think that. Nothing can prepare you for an emergency delivery and a NICU stay.

On New Year’s Eve in 2019, my husband and I went to our final prenatal appointment.

After our usual NST and MCA-Doppler, the doctor announced that we were to head to the hospital and deliver our daughter. I was 34 weeks along and had two steroid shots to prepare her lungs for delivery. We were told to stay calm and that everything would be fine. I was also told that before delivering Richard, so the words provided no real comfort.

I tried to stay calm as I entered the OR. I tried to focus on the overhead lights, the warm blanket draped over my body, the inane conversation about New Year’s Eve plans. All I could think was, “Please deliver her safely. Please let her live. Please let her come home with us.”

As she was pulled from my body, everyone applauded, and I was given a quick glimpse of her tiny, pale body. A crowd of NICU nurses surrounded her, working quickly. Before I knew it, she was being wheeled away – just as her brother had been.

My husband and I looked at each other, and I begged him to remind me once again that our daughter would be fine.

Although she was fine, and this delivery was completely different, there were several triggers, constantly reminding me of our son and the trauma of his death. I was brought to our hospital room to recover from surgery. Although we were in the maternity wing, surrounded by crying babies and families bringing celebratory gifts, our room was empty. There was no bassinet beside my bed holding a swaddled baby. I had to repeatedly tell myself that our daughter was alive, and that she was simply in the NICU.

At one point, I turned to my husband and said, “I feel so empty. I know that I gave birth, but I don’t feel connected to her. It’s like it never happened.” Although he had visited her several times and sent me pictures, everything felt like it had happened to someone else. We decided that it was time for me to go visit her myself.

As he pushed my wheelchair through the large NICU doors, he pointed to the left and said, “That was where they worked on Richard.”

I looked over, and I felt my heart skip a beat. There was the purple stained glass panel and the room in which we held our son. It looked smaller than I remembered. It also looked so mundane, so ordinary. How could such a simple room hold so much trauma and pain?

We rounded the corner and entered our daughter’s room. Aside from the rhythmic beeping and the air from the oxygen tank, it was quiet. She couldn’t cry, and her eyes were covered with foam goggles to protect her from the bilirubin lights. My eyes scanned her body, and instead of being filled with love, I was filled with heartbreak. I couldn’t see past the wires and tubes, the frailness of her tiny body. I could only think, This is what my body did to her. Why couldn’t I keep her safe?

We weren’t allowed to hold her, and I couldn’t nurse her at all. Instead, we reached through the sides and tried to hold her hand while she was fed through a feeding tube. We spent hours each day just looking at her and trying our best to advocate for her and understand the medical jargon.

After three long days, we were allowed to hold her for just one hour, so my husband and I agreed to 30 minutes each. As I sat, eagerly waiting to hold my daughter for the first time, I watched the two nurses carefully maneuver the intricate tangling of wires. I was scared to hold her, not because of her fragility, but because of my lack of connection to her. 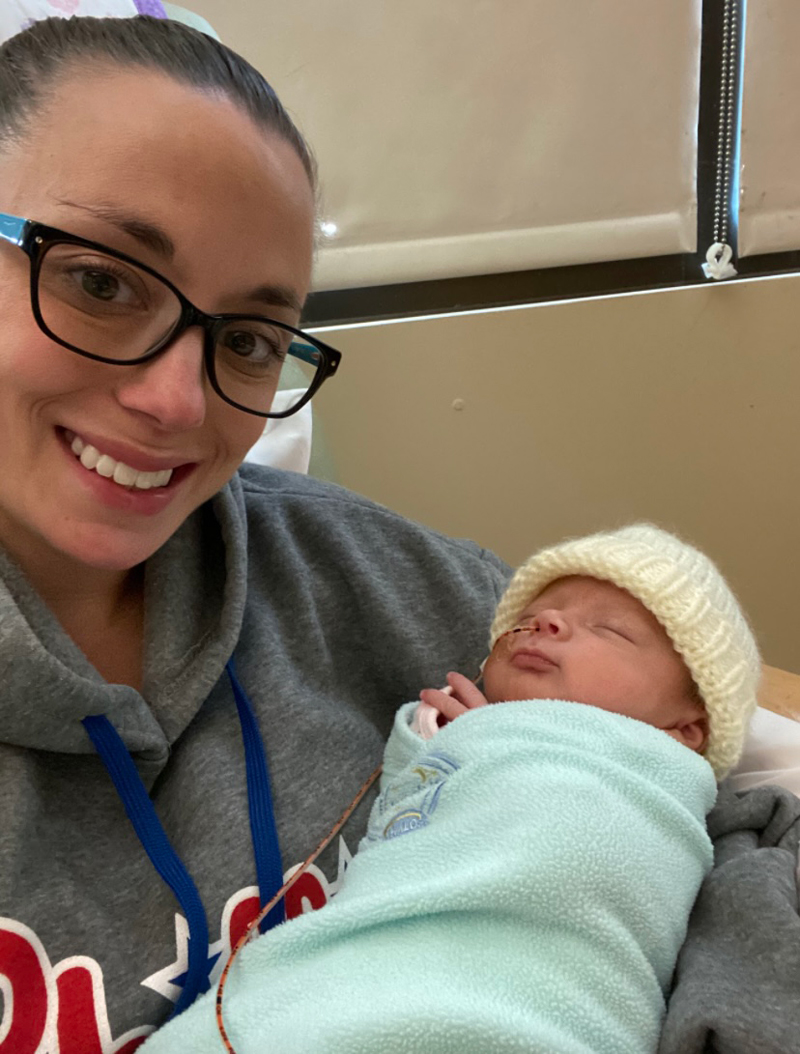 The nurses carefully placed her into my arms, and when I looked down at her, I knew she was mine. 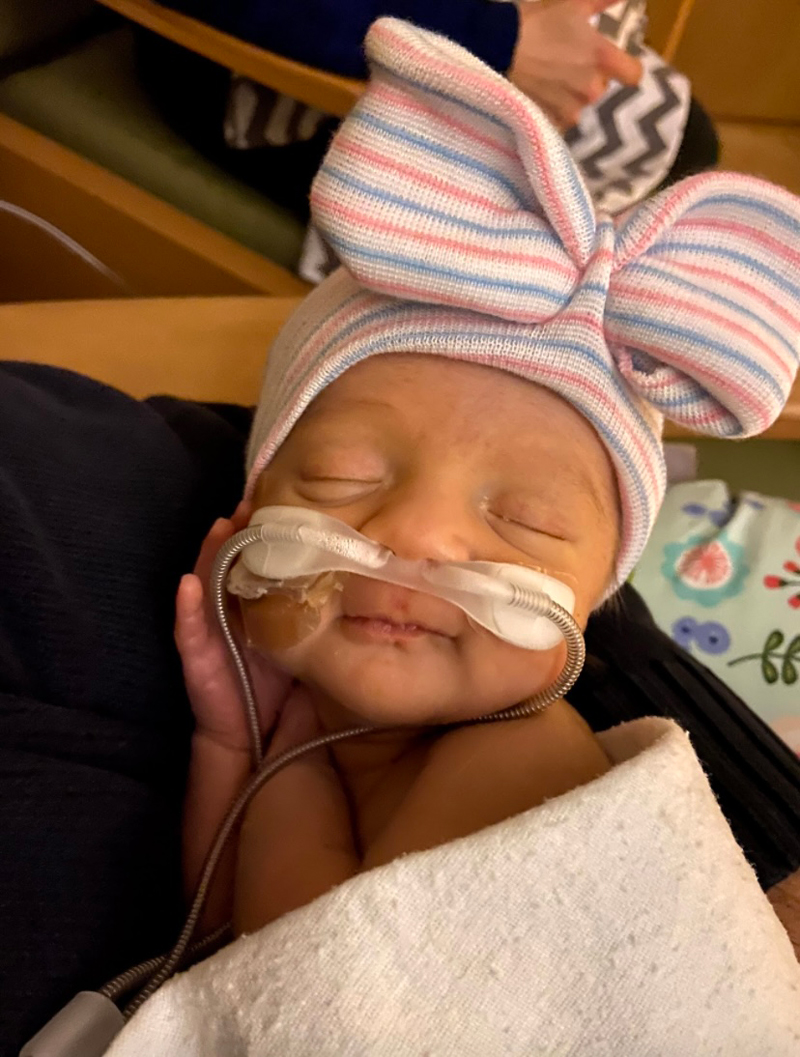 Our little girl stayed in the NICU for one month. During that month, we experienced many victories and setbacks. It felt that with each step forward, she would take two steps backward. We soon learned that a stay in the NICU is a marathon, one in which we needed endurance.

What helped us most during that stay were the nurses and doctors. Not only did they tend to her as if she were their own, but they talked to us about Richard. We met the staff that tried to save him that night in May 2016. When so many people in our lives had never met our son, these men and women did, and they celebrated him. As difficult as it was to journey into the NICU with our youngest, we knew that it was where we were meant to be as a family. 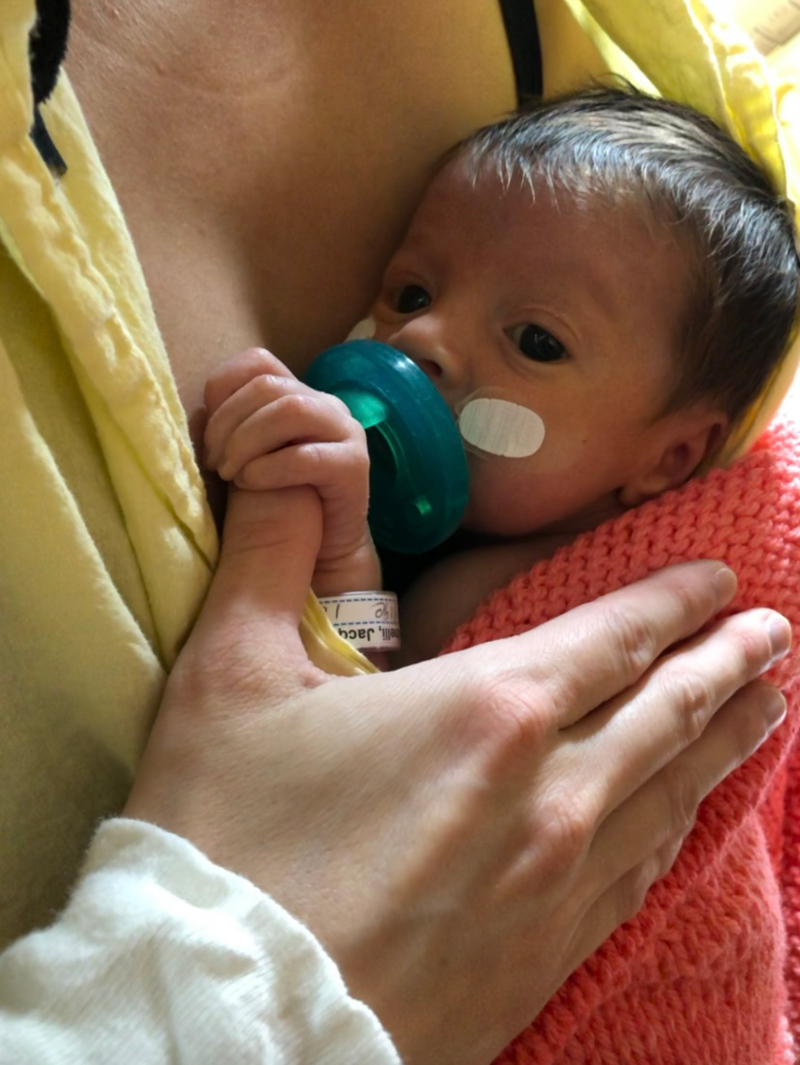 It was painful to see that purple stained glass panel each day when we visited our daughter, but I learned to appreciate its complicated beauty.

About the Author: Jacquelyn Mancinelli

Jackie Mancinelli is a high school English and ESL teacher in New Jersey. She is the founder of Start Healing Together, an organization dedicated to supporting educators experiencing pregnancy loss and infertility. She is also the New Jersey Ambassador for Count the Kicks. Follow Start Healing Together on Instagram and Facebook, and check out their website. To learn more or to start a chapter at your school, contact her at jackie@starthealingtogether.com.