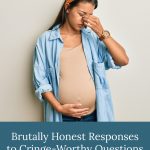 As loss parents, we’ve all had moments where a comment and question was made — however well-intentioned or innocently delivered — that made us give the “standard response” or what was expected to be said in reply. So many moments where, in our heads, we think, “I wish I could say…” But we can’t because there are certain conversational niceties — or things you just say — when discussing someone’s pregnancy. You can’t just be brutally honest. Especially to the cashier at the store, or the sweet elderly lady you cross paths with on the street. 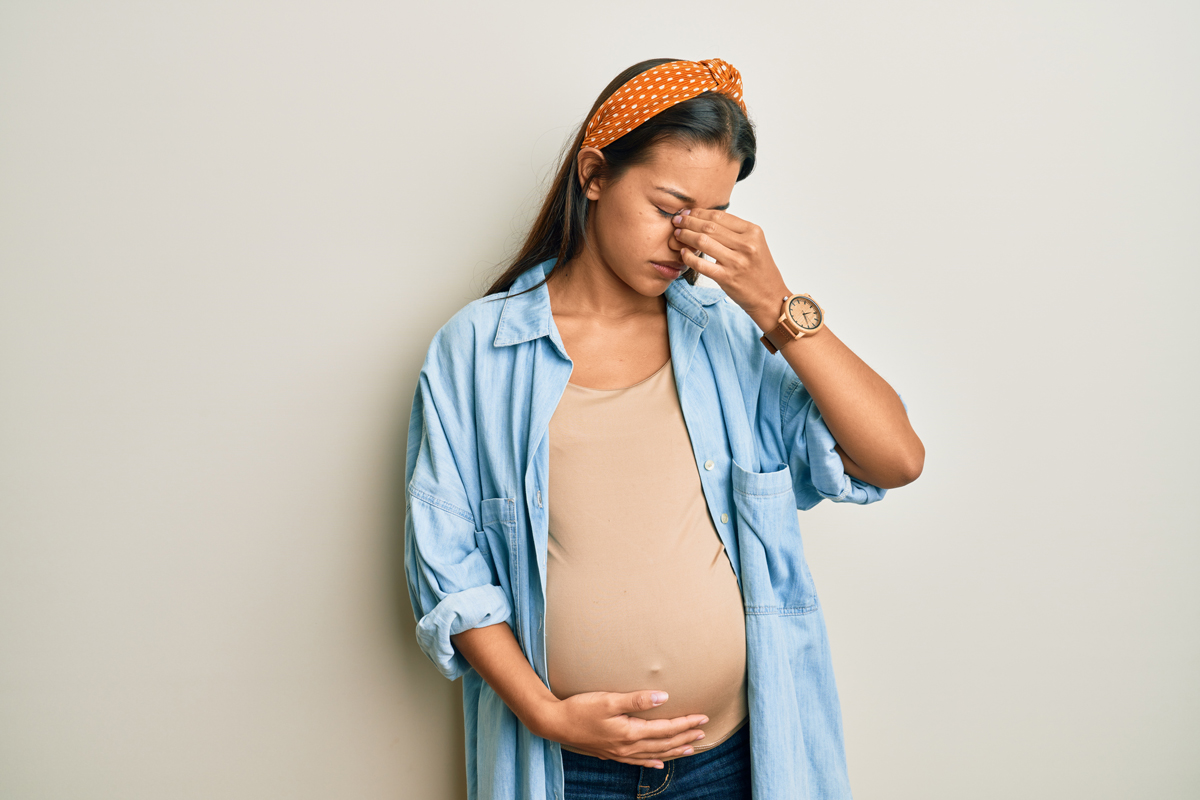 People want to have the happy conversation about pregnancy.

No one wants to discuss how scary it can be or how anxious it might make you. People like to discuss the happy stuff, not the hard stuff.

It reminds me of one of my favorite podcasts, Terrible, Thanks for Asking. It derives its name from an idea of being unapologetically truthful when someone asks a grieving person, “How are you?” The show describes it like, “You know how when someone asks, ‘How are you?’ you just say, ‘Fine,’ even though you’re totally dying inside, so everyone can go about their day?” Loss parents often do the same thing when expecting again.

There were so many times during my subsequent pregnancies when I wished I could be brutally honest in response to these questions or comments.

Most of the time I didn’t say what I was really thinking. Partly because I live in America and it’s customary here to say “good” after the “how are you?” question, if you even need to respond at all. So, I’d go home and journal about it instead.

But I can share these thoughts with you, my community of courageous parents, because I know you’ve probably had similar thoughts and experiences. And you could probably add more of your own to this post.

“Is this your first?”

The question that haunts every pregnant after loss mom, and the one that every stranger you meet in an elevator feels compelled to ask. After loss any question asking how many kids you have is complicated to answer. I always wanted to say, “No, my first baby died.” But that makes for an uncomfortable elevator ride for everyone. And so sometimes I’d tell them yes and hear them tell me all about their labor experience or tell me how great it was to be a parent. Sometimes I’d tell them no and see if they asked further. I could just let them know there’s a sister and not elaborate. It really depended on how I was feeling at the time.

But if I was being honest — brutally honest — I wanted to say:

No, it’s not my first. My first baby was stillborn. Her death shattered me. And every day I’m pregnant with this one I wonder if he’ll die too or if I get to bring him home. And every time anyone asks me that it takes me a minute to figure out how to answer. And that’s really not fair. But yeah, I’m excited and grateful too.

“Get your sleep now before the baby comes! You’ve never experienced exhaustion until you have a newborn in your arms.”

Baby’s sleep patterns seem to be everyone’s business. It’s always a topic people bring up. Even after the baby is born. Most of the time, I’d smile and nod. “Thanks for the advice!”

But if I could be unapologetically truthful, I would have said this:

Actually, I’m already accustomed to sleepless nights. After my baby died, I couldn’t sleep. My grief came with a wicked insomnia that took months to correct itself. And even when I could, I would be too scared to sleep because waking up would remind me again that my baby had died and it wasn’t just a dream.

Now I’m pregnant again and I still can’t sleep! Aside from getting up to use the bathroom and being unable to find a comfortable sleeping position, I also sometimes get nightmares about losing this baby too! So I just lie awake at night trying to remember the last time I felt baby move.

So no, being exhausted and getting no sleep won’t be new for me. What will be new is that I will be able to cuddle, comfort, and nourish a real live baby when baby’s here. That’s the experience that’ll be new for me.

“He will be here before you know it!”

My first baby–the one who died–was premature. “Being here before you know it” just reminds me that at any moment my baby could be here early again. I didn’t want the baby to be here before I knew it. Baby needed to take his sweet time and come when we could be certain he’d survive.

So if I could be honest, even if it hurts, I would have said:

This goes along with the previous comment. But brings up a contrasting emotion. Pregnancy after loss is the longest 40 weeks you’ll ever experience. It doesn’t go fast. Add on the months of pregnancy before my first baby died and it feels like I’ve been pregnant forever.

This comment also carries with it the insinuation that you need to enjoy it because it’s fleeting and you’ll miss it when it’s done. That’s so convoluted too when you’re a pregnant after loss parent. Because of course, you’re grateful to be pregnant. Of course, you’re trying to enjoy it. But it can be hard and that’s ok too.

So, the unadulterated truth, if I could have said it:

Actually, I really hope it does go fast. I just want to fast forward through the first trimester, through the scary gestational age at which I lost my first, and get to the part where I get to bring a cute, living child home. I don’t want to be pregnant anymore. I want to hold my baby in my arms.

Of course, I’m aware I could miss the days of being pregnant. But being joyful and trying to remember it goes by fast is hard when you’ve been through traumatic loss.

“You’re finally going to be a mom!”

This is the one that always left me dumbstruck. Because it’s true, I’d never yet had the chance to parent a living baby, but I was a mom. I gave birth. I held my baby. My milk came in. I had to think of a name for my baby. But that’s where “traditional” parenting stopped. I’ve never had to soothe my own crying baby. I’ve never experienced a blow out diaper that required a change of clothes. I never had to figure out when and how to pump at work. Yet, I was still a mom, wasn’t I?

But how do you explain that? If I was struggling with it, how could I counter it in conversation?

Now, after a few years out from my loss and coming to terms with it on my own, I would have liked to tell them this:

Actually, I became a mom when I decided to have my first baby and started making changes to adapt to pregnancy and preparing for a baby to be born. When the baby died, I still had to lovingly plan how we’d say goodbye, how we’d remember her, and how we’d celebrate her year after year. And now, when we’re getting ready to welcome her sibling, what I’m doing now to prepare for his arrival – despite tremendous fear and anxiety that he won’t be able to come home either – is momming at its finest. I’ve been a mother for over a year now. What’s next is being able to parent a living child.

“You must be so happy now!”

This comes after you bring your rainbow baby home. Obviously, the birth of your baby heals the grief from losing your other baby. It’s the happy ending to the sad story everyone has been hoping for. But we loss parents know that’s not the case. Sure, our babies born after loss help make the world a brighter place, but children aren’t replaceable and grief never magically disappears. Closure is hard to come by in this community.

Not to mention the fact that being in the baby loss world, you know nothing is guaranteed, even if you bring a healthy baby home from the hospital. Anxiety can shift. Fear can still remain. And you’ll spend a lot of that first year trying to grapple with all of those emotions still.

So, if I could be brutally honest, I’d tell them all of that. And actually, I have. Because on the other side of this, after your babies are here and you’re somewhat removed from the immediacy of the experience, PTSD subsides, and you’re able to breathe a sigh of relief, even just a bit, you are able to educate and advocate. You can explain your experience in a way that will help make others think before they start asking random strangers about their pregnancy experience.

What would you add? What brutally honest answers do you wish you’d given to those tough questions during pregnancy after loss?

More on this Topic: