This month, I celebrated with many other breastfeeding/pumping mamas from August 1-7 for World Breastfeeding Week.  I’ve celebrated this week for several years now, since Henry was born in 2006.  Every year, I participated in the Big Latch-On with excitement and pride and love for the community of breastfeeding women around me.  But this year was so different. 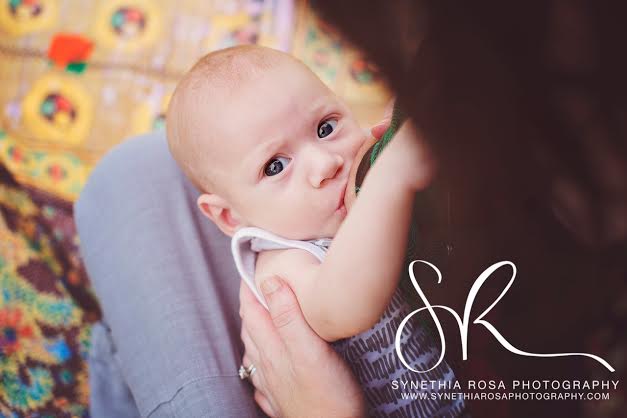 Breastfeeding a rainbow baby is such a completely different experience, for me at least.  I’ve breastfed two boys, Rigby being my third, and nursing him has once again changed both my perspective on breastfeeding and my dedication to it.  Breastfeeding Henry was wonderful; he latched on in the delivery room and never looked back.  My milk came in around day five postpartum and seeing him gulp so readily and watching those eyes get heavier as he enjoyed the first real taste of that milk, it was bliss mixed with love and a little bit of relief.  Relief knowing that we had started off so well, mastered that first dance between baby and mama.  With Ezra, it was harder.  He wouldn’t latch after the second day, and he started losing weight.  I had overactive letdown, I deduced, and with the use of nipple shields for about three weeks, we too mastered that dance.  It took more work, but we did it.  One day, he latched on without needing that shield and never again did I have to find one frantically while Ezra screamed for milk.  I’ll never forget it, when he was around a year old (and still nursing like a newborn!), I found a nipple shield in our bookcase and I got weepy.  It was such a representation of those first few weeks of being his mama, of working and fighting for that relationship that we ended up having for over three years when it was all said and done.

Then we lost our daughter, and I got pregnant with Rigby.  My birth with him was SO very different than with the older two boys.  One hour and 21 minutes, from my first contraction to daddy delivering him in front of our family bed in our home.  It was wild and crazy and chaotic and the most amazingly beautiful experience I’ve ever had.  Our midwives made it about 20 minutes after Rigby was born and came in to me holding him on the floor while my mom and my sweet husband got towels and found a bowl for my placenta.  It was magic, pure magic.  I can’t even begin to describe the immense joy and relief that was whirling around that room.  We stayed in that bedroom together, our new family of five, all day.  Rigby latched on like a pro at first, just like Ezra, but he too suffered an inability to latch after three days due to my overactive letdown.  We bought nipple shields immediately and he was fine.  We weaned off the nipple shields and he’s still nursing like a champ today.

But there was a sense of urgency, of fear this time.  I knew I could successfully breastfeed Rigby with nipple shields and wean him off of them when the time came, but I felt such a devastation this time.  I hated those shields, and tried to force him to go without, only days after first introducing them.  I was so angry that I had to use them with him, with THIS baby.  It took me some time to realize why I was so angry, why my blood boiled every time I applied that plastic annoyance to my breast:  it was like a red flashing sign telling me that once again, my body was failing me.  Once again, my body couldn’t do what it was supposed to do.  My poor baby couldn’t latch on because my milk flowed too quickly for him and choked him.  I was once again a broken model of a mother, the recalled version of a mom.   I would be recalled if I were a car or a baby swing. I was the faulty edition.  After losing my baby girl, I was supposed to be able to find redemption in Rigby’s life, and especially in the bond we would have through breastfeeding.  I truly felt as if that small, thin piece of plastic was like a brick wall between us, preventing us from fully being that beautiful breastfeeding pair.  I resented my body, myself, everything.  I couldn’t carry a baby girl to term, she died inside me, and now I couldn’t even properly feed the baby boy that I had been given.

Once the hormones reached homeostasis in my raging postpartum body, I started to see that I wasn’t failing him at all.  Those shields were actually giving me what I so desperately wanted which was to nurse my sweet Rigby boy.  They were just a tool helping us get the job done, and I realized that even if we had to use them for the duration of our breastfeeding relationship, that was okay with me.  I began to revere our precious dance, plastic pieces and all.  I was giving him life through my milk, sustaining him and growing him, something that I couldn’t do for our little one lost.  I was nourishing him, even though we needed a little help, I was still his source of sustenance.  Just because it wasn’t perfect didn’t mean it wasn’t perfect for us.  I cried so hard that day, when the light bulb finally went off and I saw what a wonderful gift it was to be able to nurse him at all.

This year, I got professional photographs taken of Rigby and I breastfeeding during World Breastfeeding Week.  I ordered lots of prints, and two large canvases of two prints that just shook my soul when I saw them.  One of the prints, Rigby is latched and nursing and looking up at Synethia, my friend and photographer.  He looks like he’s studying her, suspicious of her motives and the giant black thing she was looking through.  I love that picture because to me, it said that my sweet Rigby was as protective of our breastfeeding relationship as I was.  I saw in those big eyes and his furrowed brow a defensiveness, a need to keep secure that bond that we share.  Those pictures are so dear to me, every single one of them.  They’re going to be a physical reminder of this time in my life, learning to love myself again and learning to lose the hatred for my broken body.  Because broken doesn’t always mean imperfect.  Broken things can heal.  Maybe not all the way, but they can heal.

About the Author: Tricia Miller

Tricia Miller is the mother to four beautiful souls: three here with her, and one that shines with the sun and lives on in her heart. She loves on her three sons and is madly in love with her husband, Adam. Tricia welcomed their rainbow baby, Rigby Moses, on April 27th. He was born at home and delivered by his daddy because he was born a mere 81 minutes after Tricia’s first contraction. After closing her first blog, desperately seeking silence, she now writes the blog bohomamasoul. Tricia was also a contributor at Still Standing. She’s a SAHM that also has an Etsy store filled with vintage lovelies. You can find her on Instagram: @bohomamasoul, and Facebook: Tricia Lee Miller.