Book Review: Pregnancy After a Loss 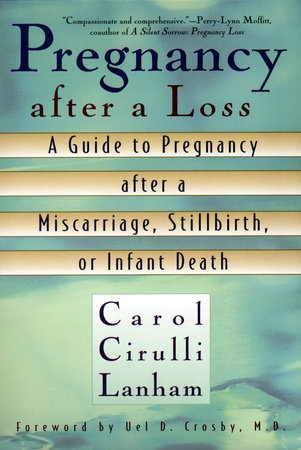 If there was ever a “What to Expect While Expecting after a Loss” this book would be it! Written over 15 years ago, it still rings true to the emotional experience of the mom trying to conceive and pregnant again after a loss.  Pregnancy after a Loss: A Guide to Pregnancy after a Miscarriage, Stillbirth, or Infant Death is written by a mom who knows the trials of loss and the confusing emotions of a subsequent pregnancy first hand, as Lanham herself lost her first child to an unexpected stillbirth on her due date. She went on to have two subsequent pregnancies and children. Feeling as though there were not enough resources available for the unique experience of the PAL mom (and there still aren’t), Lanham decided to write this much-needed book.

Fifteen years later there still isn’t much literature on the experience of a pregnancy following a loss, but this comprehensive book provides us with a great place to start.  The book might look intimidating to read at first, being almost 400 pages in length, but it’s nicely broken up into the stages of a subsequent pregnancy, starting from the days and weeks following the initial loss with questions to consider, then covering, a future pregnancy. It takes you through the stages of PAL, from trying to conceive, through each trimester to the birth of the baby, then to adjusting to life after bringing baby home.

Lanham’s book does a great job addressing common themes that the PAL mom faces, such as wondering when one might be ready to try again after a loss to how to cope with the anxiety of the unique experience that is pregnancy after a loss. It even addresses bedrest, other health considerations that are common during a subsequent pregnancy, and the father’s perspective of going through a pregnancy after loss with his partner.

The only critiques relate to the age of the book.  Since the book is 15 years old, some of the resources listed in the book are outdated or no longer in service.  Also, if you are like I was and wanted to find a memoir or story where you could relate to the main character’s personal struggle with going through the journey of a pregnancy after loss as you are also journey through it, this isn’t the book. Yes, Lanham’s experience is totally relatable, and she captures the emotional experience of multiple women who have been through a PAL, just not in a story format. However, the book is fabulous in it’s structure, as you can put it down and come back to each section as you progress through your own pregnancy after loss journey.

Finally, do you want to know a secret? When I picked up this book again in the weeks after we brought home my healthy baby born after a loss, my third baby, Pregnancy After Loss Support was conceived! After reading Lanham’s book I just knew the idea and concept of her book needed to become more up-to-date with today’s technology and how moms now digest information.

When I read these words in her book I knew just what I needed to do, “Women who have experienced a loss and have had the courage to try again are in the best position to give you the encouragement and the advice you need.” She goes on to say that, “you will meet them in this book.”

And you do meet them in this book, but I thought to myself, “But now you can meet them in real life too, all around the world, and have conversations over Facebook, texting, blog posts, and even the phone or in person!” Fifteen years later, and with the convenience of the internet, this feat is possible!