Before You Were Born 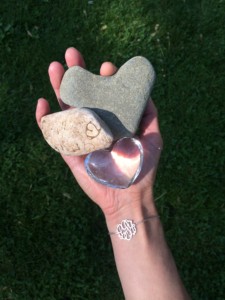 “What’s that, Mama?” My eldest daughter asked as she pointed to the silver bracelet I’ve worn on my right wrist for four-and-a-half years. At nearly three, she is, as the community says, my first rainbow baby.

Ever since I was pregnant with her, after two losses, I’ve thought about how I would tell her about her brother, born still at 24 weeks. I wanted her to know as soon as I felt she could understand, but I wasn’t sure when that would be. I also wanted him always in the fabric of our family—known, seen.

Today, he is and he isn’t. He is in every heart I find, and my daughter knows that hearts mean a lot to us. (“Har” was an early word.) But he isn’t in all the photographs; he can’t be. With our second daughter here now, we are settling into our shape. Meanwhile, a backdrop remains. As I witness sisterhood, I wonder about what kind of big brother my son would have been, all the while knowing his sisters wouldn’t be here if he had been. Sometimes, my littlest wears the pajamas or the t-shirt meant for him, but first worn by my rainbow. It’s a strange, wonderful, heartbreaking version of handing down.

I hold onto him as best I can. The memory of his cheek against my lips, his 1.5 pounds in my arms, his name always coursing through my mind. And this month, I told my daughter about her brother, whose story, in some way, I am always telling.

“Those are initials. They are the first letter of each of someone’s names,” I said. She is learning her letters and loves to ask me what words or names begin with. “Your initials are H.J.P. My initials are J.M.P.”

Her finger traced the loops in the script on my wrist. Together, the three letters form a circle. The chain is thin, but strong. I almost can’t feel it, but know it’s there.

“Are those my initials?”

“Are they yours?” She then asked if they were her sister’s or Dada’s.

Here it was, the question I had been waiting for it, the definitive inquiry I couldn’t gloss over. I thought I’d feel nervous during this parenting after loss rite of passage, weary about how to introduce her to her brother and to death at the same time. But I didn’t. I felt calm, nearly seen in a more complete way by my child.

“Well, you know how you always say you swam out first and then your sister did?” This was a story she liked to tell about the order of things in her life and one she had crafted with pride. Part of me hadn’t wanted to change her story, to alter her still-two-year-old world. But I couldn’t lie. I wouldn’t want to.

“Someone actually swam out before you,” I began. “You have a big brother.”

“You have a brother?” she tried to rephrase, her brows knitted, her cheeks still chubby. There on my lap, she felt like my baby while in new, startling ways each day, she proves her independence here in her official little girlhood.

“No, you do. He was my first baby, but his heart was very sick and I didn’t get to keep him.”

“Yes. And I was very sad. But then I had you and got to keep you, which has made us so happy.” I brought my nose to hers, a quick nuzzle of connection. “Then I had your sister. And I feel so lucky to be your mommy.

She looked at the bracelet again. “What’s his name begin with?”

“His name is Lorenzo. It begins with L. And he is why hearts are so special to us when we find them.”

She seemed both absorbed and unfazed by this new version of our lives. Soon, she slid off my lap and scampered away to play. Our first conversation about her brother was as organic to our day as any we might have.

She hasn’t asked other questions yet. I haven’t offered more of the story. But I know we both will as the conversations evolve, as layers are added and revealed. The miscarriage that came after, all the waiting that led to her. The story—hers, mine, his—is always there. We will tell it together, perhaps, to my youngest when she is a little older. Then it will be theirs—my two daughters and the understanding they have of their brother, of their parents before they were born, of our family beyond the borders of the photographs of the four of us.