Announcing My Pregnancy After Loss 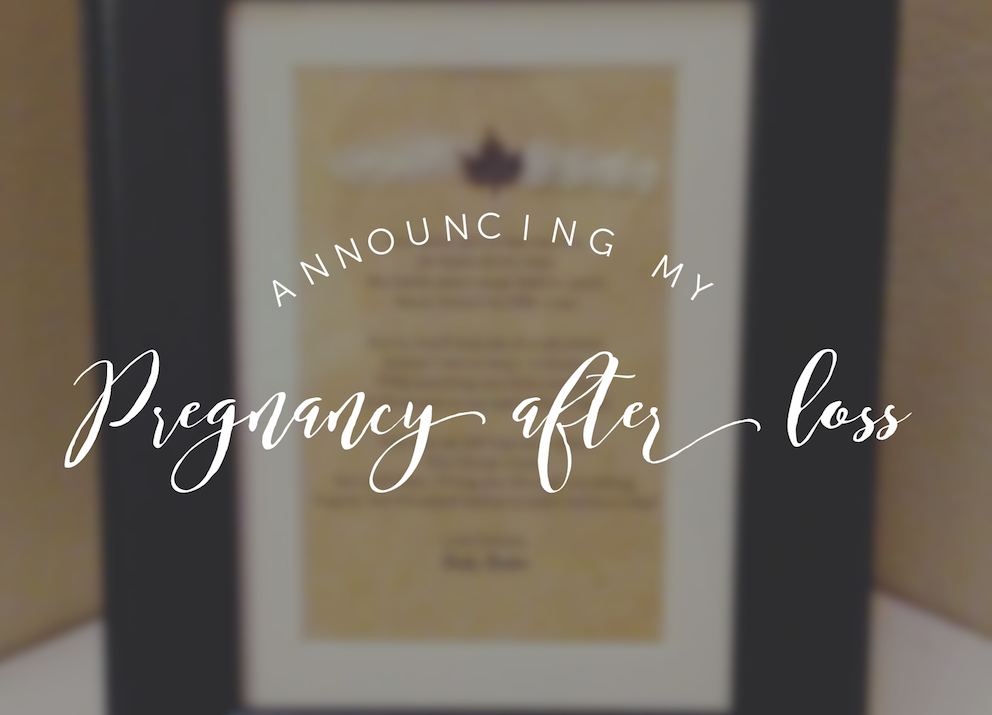 Moments after I lost my first baby at 13 weeks, a chaplain walked into my room, carrying a mint green shawl. As he laid it down the length of my body, he explained that volunteers crochet them to comfort grieving mothers—mothers who lose babies and leave the hospital with empty wombs and hearts. I slept with that shawl every night. I carried it. I wrapped my broken body with it. It became a part of me. The texture and smell became more familiar to me than my own skin.

A couple months passed. The bruises were gone and the bleeding had stopped. But I found myself standing in very complicated and unfamiliar territory. I was still grieving my loss, yet ached with a deep desire to be pregnant again. I was broken and hopeful at the same time. My husband and I agreed we were ready. So, after my first normal cycle (which I was so very thankful for), we tried. And 2 weeks later, I found out I was pregnant.

This time it was different though. How could it be anything but different? My husband and I decided not to announce our pregnancy as early as we had before. It wasn’t because we were scared—although we were. It wasn’t because we expected something bad to happen—even though we knew it was a possibility. It was because we were still grieving our first loss. And this pregnancy had become a sacred secret that we held. Just us. Grieving our first baby while privately celebrating our second pregnancy allowed me to hold them both at the same time.

I decided to write a poem to announce my pregnancy to our parents and siblings. I sat on our sofa with a notebook and pen and cried. I cried because I missed my heaven baby. I cried because this announcement was a step forward in life when I wanted time to hold still—so I could remain as close to my baby as possible. But time did not stop. The ticking of the clock stayed consistent and constant. And I really was so excited for the baby that had begun to grow in my tummy. So as I sat on the sofa, pen in hand, I wanted our first baby to be a part of our announcement. So I wrote an announcement poem from the viewpoint of our first baby.

You never got to see my face

Or tickle all my toes

My hands were never held in yours

And as I rest in Jesus’ embrace

I’ll be watching you from heaven

Until we get to see each others face!

One day we will hug each other,

This I know is true.

But until then, I’ll hug you through my sibling,

August, two thousand twelve is when he/she is due!

I knew our loss had affected our entire family. Our parents lost a grand baby. Our siblings lost a niece or nephew. The weight of that truth made me want to share my most treasured possession—the thing that physically had comforted me in the weeks following my loss—my shawl. I carefully cut some of the yarn from the end of the shawl. I printed off the poem and with a leaf-style push pin, I attached the soft piece of yarn to the top of each poem and then framed each one.

As each family member opened their poem, they immediately began to cry. At first they thought it was a keepsake from the baby we lost. And actually, it was. It was something tangible for them too. But when they got to the end, they realized it was also an announcement.

It had encompassed everything I wanted it to. Comfort for their own grief. Celebration for the baby inside of me. Unity among us all.

It remains so important to me to include our heaven babies in our earthly family’s celebrations, holidays and life events. Those days would not be complete without them. That inclusion takes many different forms—whether it’s an official pregnancy announcement and Christmas ornament or just a simple moment of reflection and acknowledgment of their little lives.

They are always with us. Always a part us. And in a changing world, that truth will always be my constant.