Adjusting to big transitions while parenting after loss 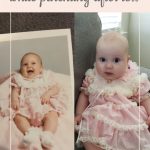 While we’re settling into life since the birth of my rainbow baby, we’re also adjusting to some big transitions while parenting after loss.

Last month, I had to do that dreaded thing that is so hard for most moms. I had to take my daughter to her first day of daycare.

She was 12 weeks old the first day I took her. I am very fortunate in two aspects. My job allowed me to work at home, so I was able to stay with her longer than I normally would have been able to. I also have a daycare that I greatly trust. She watched our son starting when he was 7 weeks old and has been amazing with him.

Despite all this, that first day of entrusting them with someone other than yourself is hard.  Will they cry all day or not take the bottles you sent? She actually did pretty well and took the bottles without issue. It was a little surprising to me since she has fought my mom and husband on taking it.

I also found that by dropping her off, I gained a little bit of freedom. I was able to go into the office and do a phone call with a client without worrying she would cry and disrupt the office. I was able to wear a dress and not worry if it was accessible for breastfeeding. I enjoyed being in the office and having adult conversations. Leaving her the first time is always the hardest. It gets easier from there. 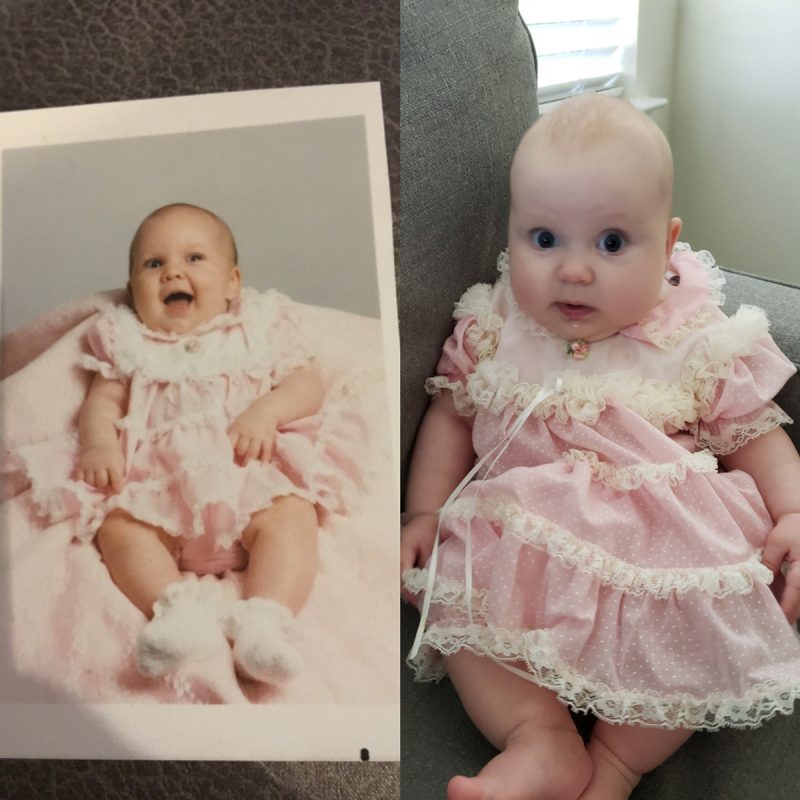 My mom saved a few dresses from when I was a baby and brought them over for me to try on Emma. She was not a fan of the lace, but I got it on here. When I compared it to a picture of when I was little I can definitely see some similarities!

The other big transition I have been dealing with is a move to Atlanta for my husband’s new job that will happen sometime next spring.

I have lived in Texas my whole life, so the thought of moving somewhere seemed slightly exciting, but also scary when you don’t know anyone. It is also so much harder when you have children. My son just started kindergarten, and I hate that he will have to change schools when he keeps saying how much he loves his teacher. It means finding a new person to trust to take care of my daughter. It means leaving all of my family and not having them to rely on for help. It also means having to find new doctors when I already have ones that I really like.

We did not make the decision lightly. We went back and forth over what the best option was.  He even turned down the job at first and then things happened from there. It kind of felt like one of those things that was supposed to happen. I was not at all on board at first. Then I was on board and he wasn’t. It went back and forth like this until we both actually agreed that we should do it. We have until June to move. It was nice to have extra time, but now as more time passes with me staying here while he travels, I get more nervous about it. I like my life here. I like having my family here. I like my job and my coworkers. I like our house, and so many other things.

In the end, I figured out that I did not want him to pass up a good opportunity just because I was scared or going out of my comfort zone. I have to think big picture and what will be best for our family in the end. (I was also promised he would travel less once we move, which was a big plus for me).

I have always been a person that generally trusts my instincts.

Sometimes I just get a feeling that we should be doing something and usually that feeling ends up being correct. And that is how I ultimately felt about this job. That does not mean I don’t doubt myself at times after making this decision! But I am trying to look at all of the possibilities when we move instead of focusing on all the things that I have to give up.

As a side note, I was pretty disappointed that Atlanta is not at all close to the beach. It’s about the same distance to the beach as we are from Dallas to the beach. There are a lot of things we will be closer to and I am excited to be able to explore some new places with the kids. So, here’s to new adventure!