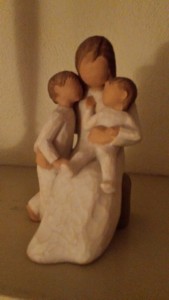 Although this year was Homer’s 2nd Christmas, it was the first during which he was old enough to actively participate in festivities (he was a mere 2 months old the first go-round). For a few weeks leading up to Christmas, I was the star of a juggling act. Finding the right rhythm of excitement for Homer’s sake while allowing myself the grief that surges at this time of year was very tricky. Rowan was due on Christmas in 2012; I brought him into the light on December 17. A mere 4 days later, on December 21, I said my final earthly good-bye to my firstborn son. He was laid to rest nearly 900 miles from where he was born on a blistering cold winter day. Suffice it to say, Christmas went by unnoticed that year. I was too devastated to even look at myself in the mirror let alone celebrate anything–even the birth of Jesus.

By Christmas of 2013, our hopes for a chance to conceive another child through our final round of IVF were high. I was pregnant again by February of 2014. Sometimes, it seemed as though I held my breath for days just to make it through those months. And then he arrived: our sweet Homer Maurice! There was so much joy for our family that Christmas. My parents flew in from the midwest; my brother and his girlfriend flew in from Colorado. My brother made a birdhouse with two levels out of reclaimed wood. One level had a cutout with Rowan’s name above it while the other level had Homer’s name above it. What made it even more special was the thoughtfully crafted “tin can phone” made of carved wood and twine that extended from one hole to the other such as the boys may have made to play with. Ah, but that is one of my FAVORITE gifts I’ve ever received!

This year, we celebrated Christmas a week late to include my husband, whose duties kept him away until late December. His gift to me was the Willow Tree figurine pictured entitled ‘Quietly.’ Receiving this was quite emotional for me, as it is a depiction of a mother and her TWO sons; I know I am a mother of 2, as does my close family and friends. However, it isn’t always acknowledged or known by others. And, I understand why this is so, please understand. There is just something about being able to look at this figurine and know my husband gave me this gift because it represents me.

I am the mother of two boys.

I am eternally grateful that he sees me this way. It is such a balm to my ever-aching heart.

I hope you all enjoyed a peaceful Christmas, and I wish you a healing, uplifting, exciting 2016.