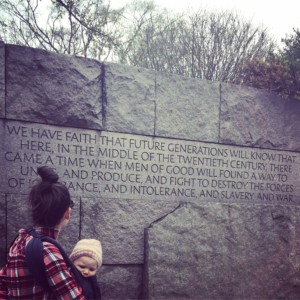 I have lost twice. I have two rainbow children. Having lived through 24, 10, 41, and 39 weeks of pregnancy, I know that much of pregnancy after loss is about managing anxiety. We figure out how to hold hope and fear. We decide when to tell people we are expecting again… and anxious again… and hopeful again. There often isn’t a true guide aside from the particulars of our story, of what our scarred hearts can or cannot endure.

This year, my first child would be turning five had a whole constellation of realities not been so. This year, my second rainbow baby turns one. I do not plan to be pregnant again, but my anxiety remains. Because for the past five years, I have written about my son for the baby loss community and anyone seeking to relate to or understand our story. I have tried hard to be a voice for him, to somehow show that our TFMR was about mercy. Our story has been published in The New York Times, The San Francisco Chronicle, and many others. This is my second year sharing our journey with PALS. I write publicly as a personal sacrifice—of privacy, of the illusion of protection—in order to help other loss moms feel less alone in what can feel like the lonely of the lonely, the lost of the lost. In so doing, I have found incredible support in mothers who have experienced miscarriage, stillbirth, infant death, infertility, as well as TFMR. Over all this time and exposure, I have only received one piece of hate mail. It was so flippant, so sarcastic, so written by a man that I deleted it and moved on. When we have difficult conversations, I do not expect all of us to agree. I do expect civility.

This is my 19th piece for PALS. I have told the truth in each one, about those 39 weeks of pregnancy with my second rainbow, as I told the truth about her big brother. And PALS, true to its name, has supported me. My 18th piece for PALS, last month’s, “Because I Am the Mother of Two Daughters and an Invisible Son,” showed me a side of the baby loss community I had not yet experienced so directly: hate and judgment. It fulfilled a fear that has escalated in me recently, when hatred of all kinds has emerged into this harsh light of an era that should know better. But we are seeing in so many painful ways across race and faith and choice that collectively we do not. (I don’t think it’s a coincidence that my first post-election piece about TFMR emboldened this hate.)

The anxiety I already feel as a public voice in 2017 coupled with this confirmation of the risks of vulnerability has made me question my advocacy. These comments were not from male politicians who have never walked a day in a woman’s shoes let alone a loss mom’s, but from loss moms themselves. Initially, I wanted to go dark, pass the torch, and let someone else speak out. I wanted to take my website down, even though my articles live far and wide. I felt relieved that the memoir I’ve written about my experience is still unpublished, making it easier to safeguard all that I still have. But in retreat, I didn’t feel better. I just felt exhausted, by the long haul of this grief but also by the need, still, to defend—there is only so much my own scarred heart can endure.

PALS founder Lindsey Henke responded swiftly and eloquently. She and my editor, Valerie Meek, reassured me about the value of my voice and that they would never be the ones to silence me. The PALS community at large also expressed moving support, which I would like to formally acknowledge and express my gratitude for here since I am not on Facebook, where this all unfolded.

A few members left the community because of me, I learned. Not a great feeling. It saddens me deeply that we as humanity can’t remain in the same room, virtual or otherwise, and at least respect one another. It devastates me that we as loss moms can’t see one another’s pain.

But still others joined. Some of those others announced decisions of their own. Some said thank you to PALS for supporting stories like mine and refusing to tolerate such shaming. When I heard all that, I knew I would rest, regroup, and—even with some of those hateful words still ringing in my ears—keep writing.

I write about my son to help others. Five years on, I see that I still need help, too. And when I really needed it, PALS, you helped. Thank you.